Parent Category: News Category: Notices and Announcements
On Friday, October 14, the Bergenfield Fire Department gave their Fire Prevention & Safety presentation to the students of Jefferson Elementary School.
The assembly included a student poster contest and trophies were given to the 1st, 2nd, and 3rd place winners.
Thank you to the Bergenfield Fire Department and all their members for keeping us safe everyday! 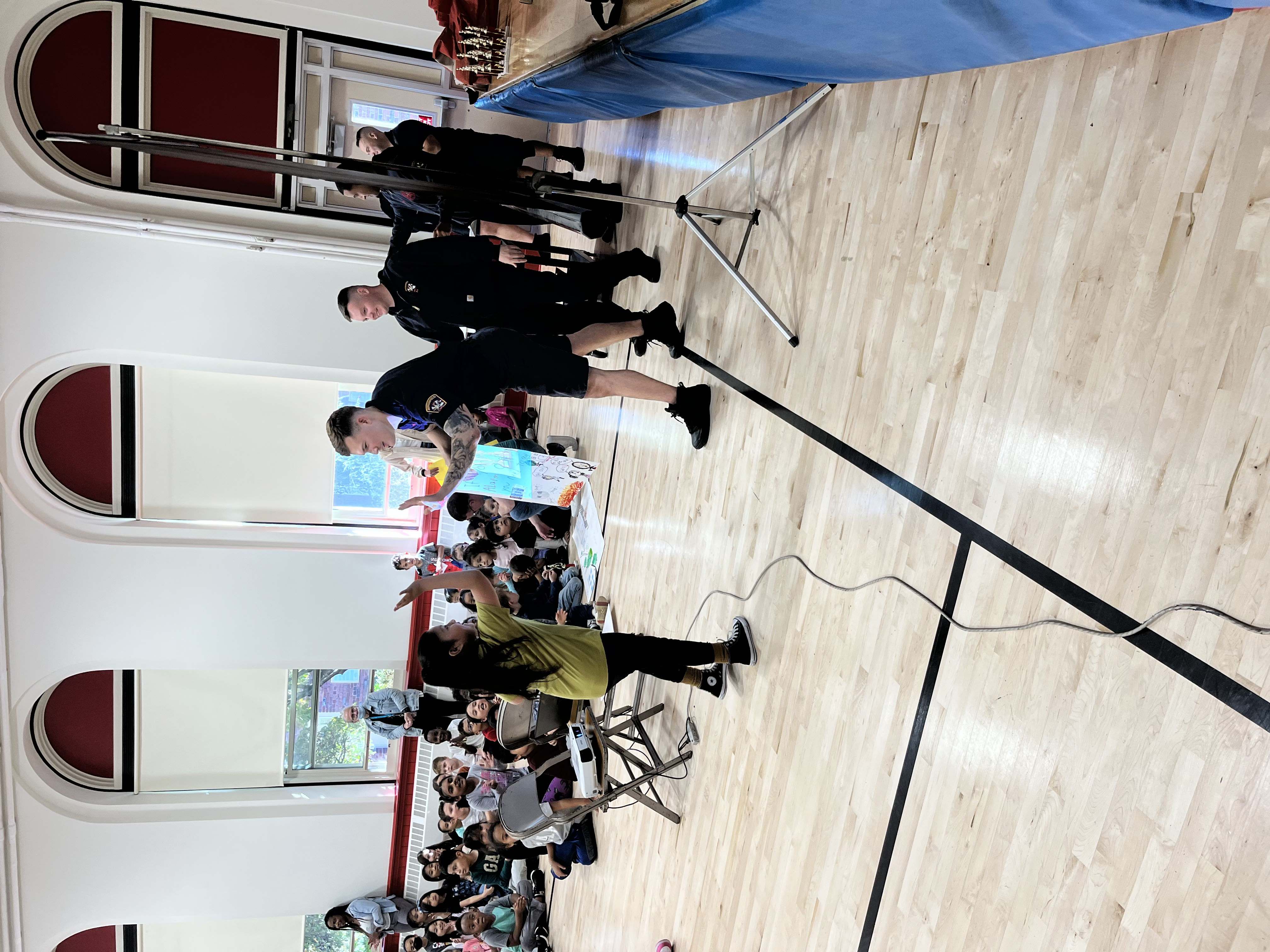 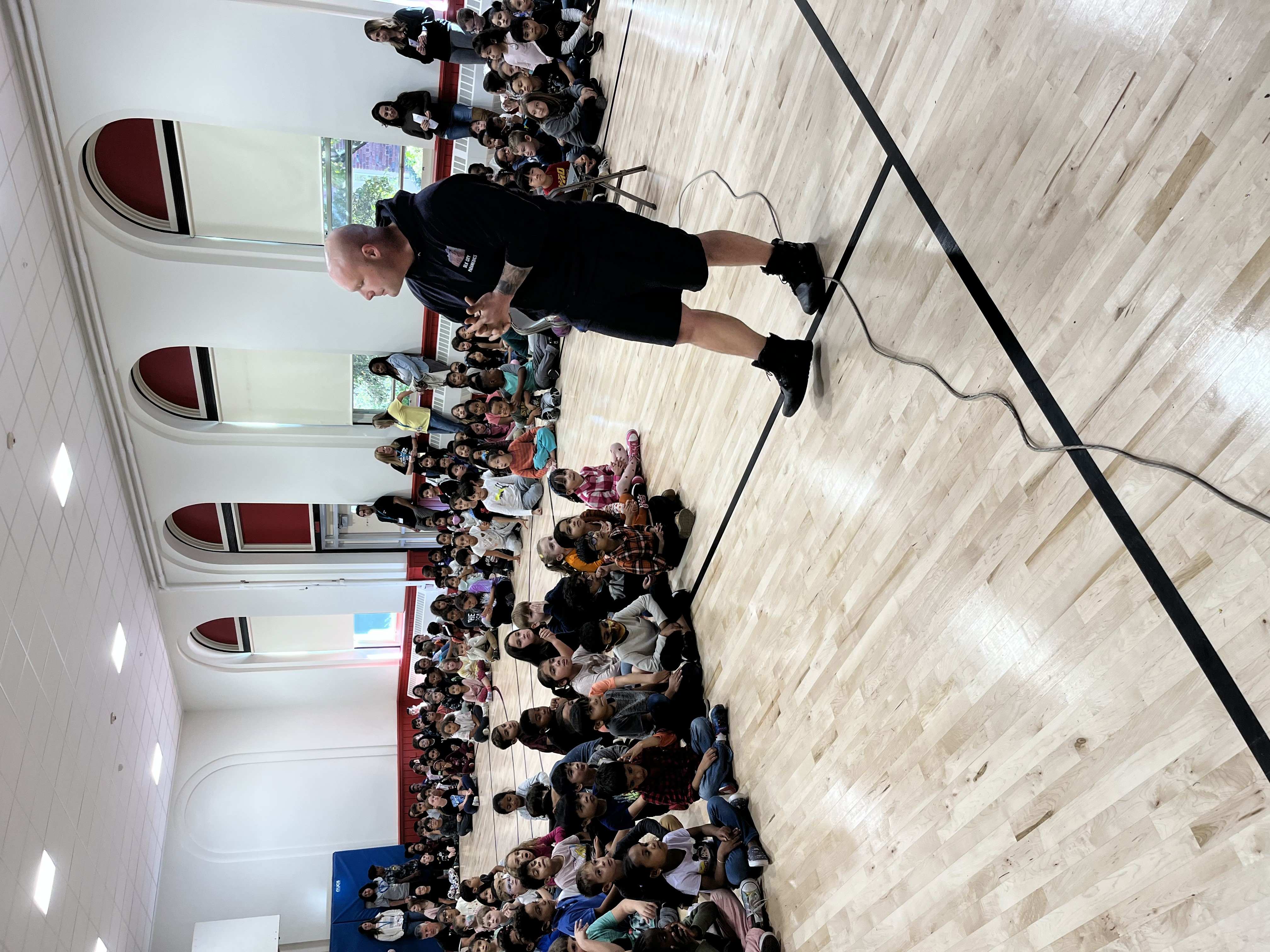 Tuesday, October 18th is the Voter Registration Deadline for the November General Election.  Applications can be downloaded from the borough website at https://bergenfield.com/voting-information or picked up and delivered to the Borough Clerk’s office on the second floor of Borough Hall located at 198 N. Washington Avenue, Bergenfield. You may also register online at the following link: https://voter.svrs.nj.gov/register

As a reminder, please note:

- Bulk pickup is for residential purposes only.

-The limit per bulk day is 4 pieces of household furniture, 2 household appliances (ex. air conditioning (AC) unit), oven, washer, dryer, refrigerator- (DOOR MUST BE OFF), and 1 carpet or rug that does not exceed 12 feet in length and/or 1 foot in diameter (including the pad) or a mixture of fragments from carpet or rug of said size. The DPW will not collect carpets removed professionally.

-Water heaters must have borough-issued inspection sticker on them, or they will not be picked up. Please call the Building Department to schedule an inspection, 201-387-4055, option 4.

-There is a bulk pick-up on scheduled bulk pick-up days only. There are no special pick-ups. Please reference your 2022 pickup schedule calendar for the bulk (B) pickup day in your quadrant by clicking HERE.

-The DPW does NOT collect brick, mortar, stone, concrete, cultured stone, or any stone-like material: the homeowner must dispose of these privately. All bulk refuse generated by a private contractor (contractor debris), or trade waste generated by any business, shall be removed at their own expense and risk.

If you have any questions, please call the DPW office at 201-387-4055, option 3, Mon-Fri 7:00am-3:30pm (except for holidays as marked on your 2022 pickup schedule calendar) or send an email to This email address is being protected from spambots. You need JavaScript enabled to view it..

To add your cell phone and/or home number to the Borough's "robo call" important announcement phone call list, please email your name, address and phone number to the Bergenfield Office of Emergency Management (OEM) at This email address is being protected from spambots. You need JavaScript enabled to view it..

Vegetative waste collection in cans and in paper bags has ended as of 10/14/22, as marked on the 2022 garbage & recycling pickup schedule calendars. Vegetative waste collection in cans and in paper bags will resume April 2023. From 10/17/22 to 12/10/22, please put your leaves and grass directly on the street in piles by the curb. PLEASE KEEP LEAF AND GRASS PILES AWAY FROM STORM DRAIN GRATES. Vegetative waste will not be picked up in cans again until April 2023. If you have branches, please cut the branches into 4 feet lengths, bundle the branches, tie the branches and place the branches in a separate pile at the curb. From 10/17/22 to 12/10/22, there is no longer a scheduled pickup day for leaves, grass, and branches (cut into 4 feet length, bundled, tied & in separate pile). From the week of 10/17/22 through the beginning of December, the DPW will be going street by street through the Borough collecting leaves, grass, and branches. The DPW will make several rounds to collect, but please put your material out as soon as possible (before 12/10/22). The approximate area where the DPW ended collection each day, and the approximate area where the DPW will begin collection the next day will be posted on the Borough website each week day (except for holidays) beginning 10/24/22. Please check the Borough website for daily collection updates, beginning 10/24/22, so that you will have a general idea of where the DPW will be collecting leaves/grass/branches day to day: Borough of Bergenfield.

(Entry via Paramus Rd. only)

Parent Category: News Category: Notices and Announcements
Councilman Tom Lodato and Councilman Marc Pascual once again took part in Feed the Front Lines by delivering food to seniors in need.
Sponsored by the generosity of donations, Feed the Frontlines is a charitable organization that supports local restaurants by providing them opportunities to make and distribute free meals to those in need. 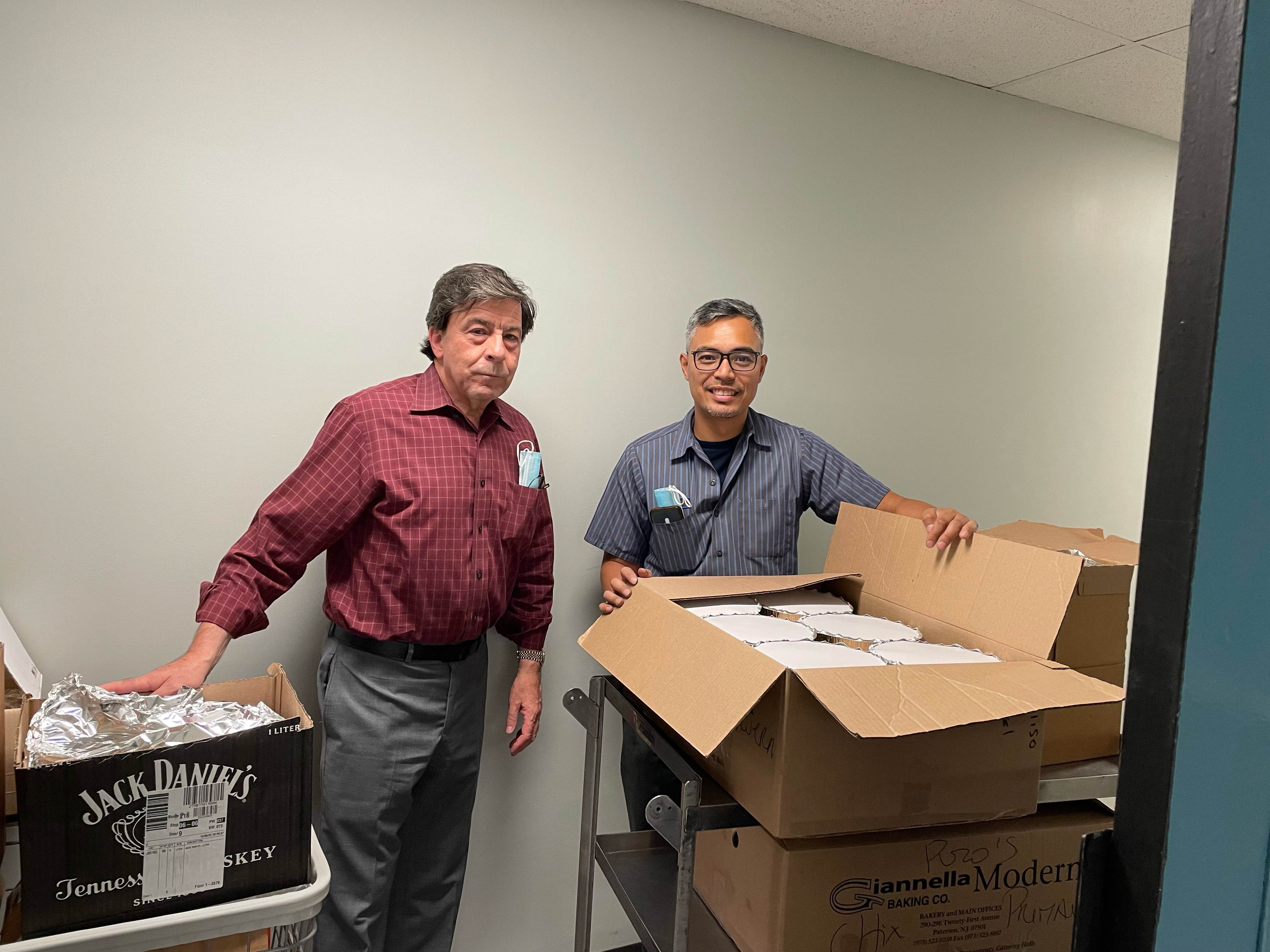 In recognition of his service to our country, Colonel Floyd Thompson was posthumously honored at a recent Borough Council meeting by Mayor Arvin Amatorio, Council Members, and the Bergenfield Veterans Advisory Committee, who spoke of his tremendous sacrifice during the Vietnam War.

“Veterans like Colonel Floyd Thompson helped build Bergenfield as well as this country, and deserve more recognition than we are capable of giving. I want to thank Colonel Thompson for his service and the Veterans Advisory Committee for ensuring we pay the proper respects to our local veterans,” said Mayor Amatorio.

Floyd James Thompson was born in Bergenfield, NJ, on July 8, 1933, the son of a bus driver. He worked in a grocery store and graduated from Bergenfield High School in 1951. He married Alyca DeVries a year after graduating and was drafted in 1956. A slight, freckle-faced young man, he was accepted into officers training and became a lieutenant.

After a stint in Korea, he was assigned to the Special Forces, known for their distinctive green berets. In 1964 he was sent to South Vietnam where a plane he was flying in was shot down during a reconnaissance mission. He suffered a broken back in the crash and was subsequently captured, tortured, and imprisoned in North Vietnam until his release in 1973, having been held captive for nine years. Following his release he returned home and continued serving in the Army until a stroke forced his retirement in 1981. He is survived by his daughters Laura, Ruth, and Pamela, as well as his son Floyd Jr.

Colonel Thompson has long been recognized as one of Bergenfield’s greatest heroes, with the Bergenfield High School field already having been named after him many years ago. The banner presented by the Veterans Advisory Committee at the Council meeting will be hung in front of Borough Hall.

The Bergenfield Veterans Advisory Committee advises the Mayor and Council on matters of importance to Veterans in our Borough.  As such, the Committee provides recommendations on programs, policies, and practices designed to assist Veterans, acts as a central clearinghouse for information, programs and services relating to Veterans and celebrates and honors the achievements of Veterans in Bergenfield. 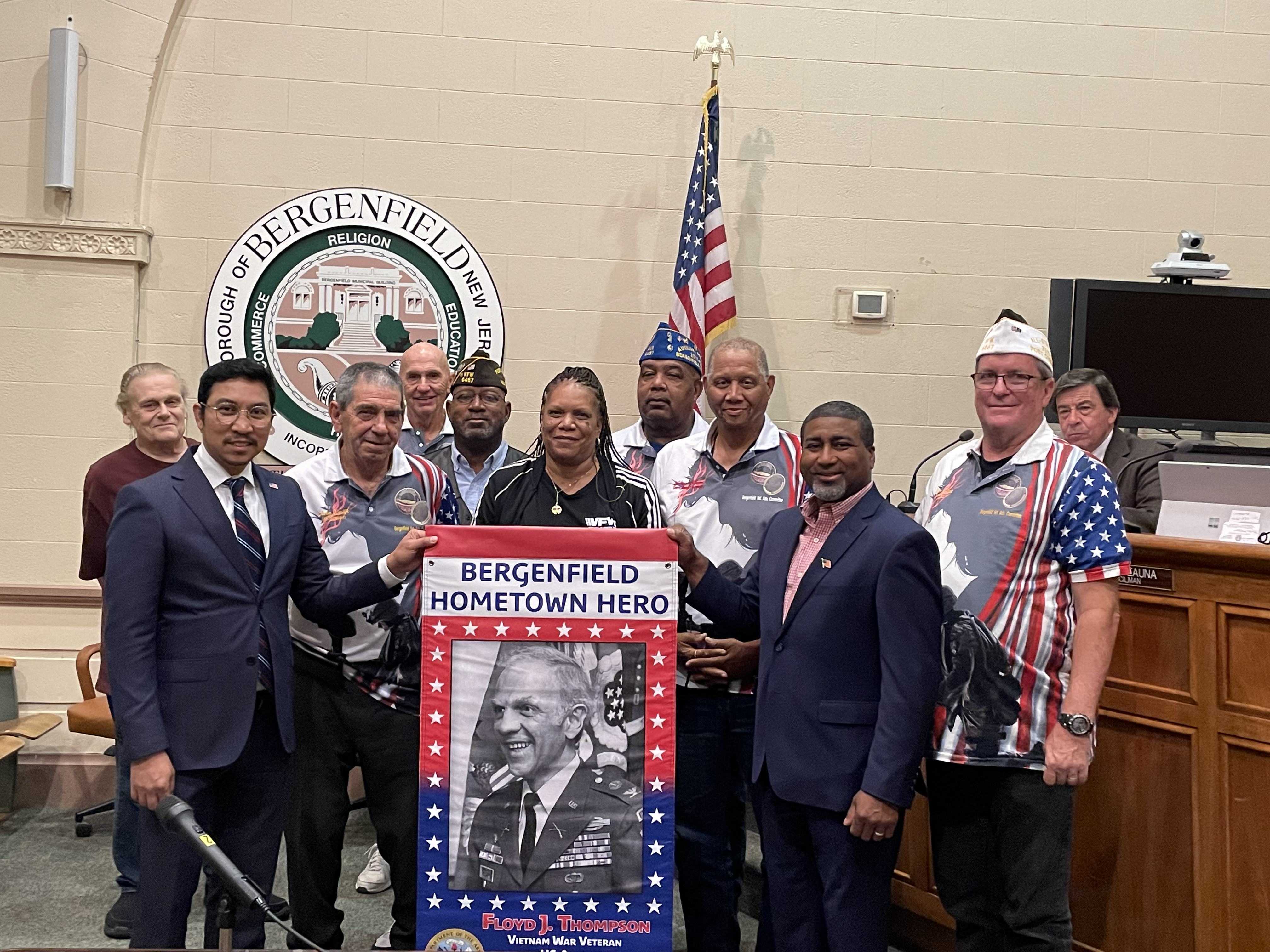 The Bergenfield Lions Club will be hosting a Pancake Breakfast on Sunday, October 16, 2022 from 8:30am to 1:00pm at Conlon Hall. Proceeds will go towards high school student scholarships. Adults $10, children 6-11 $5, children 5 and under are free. 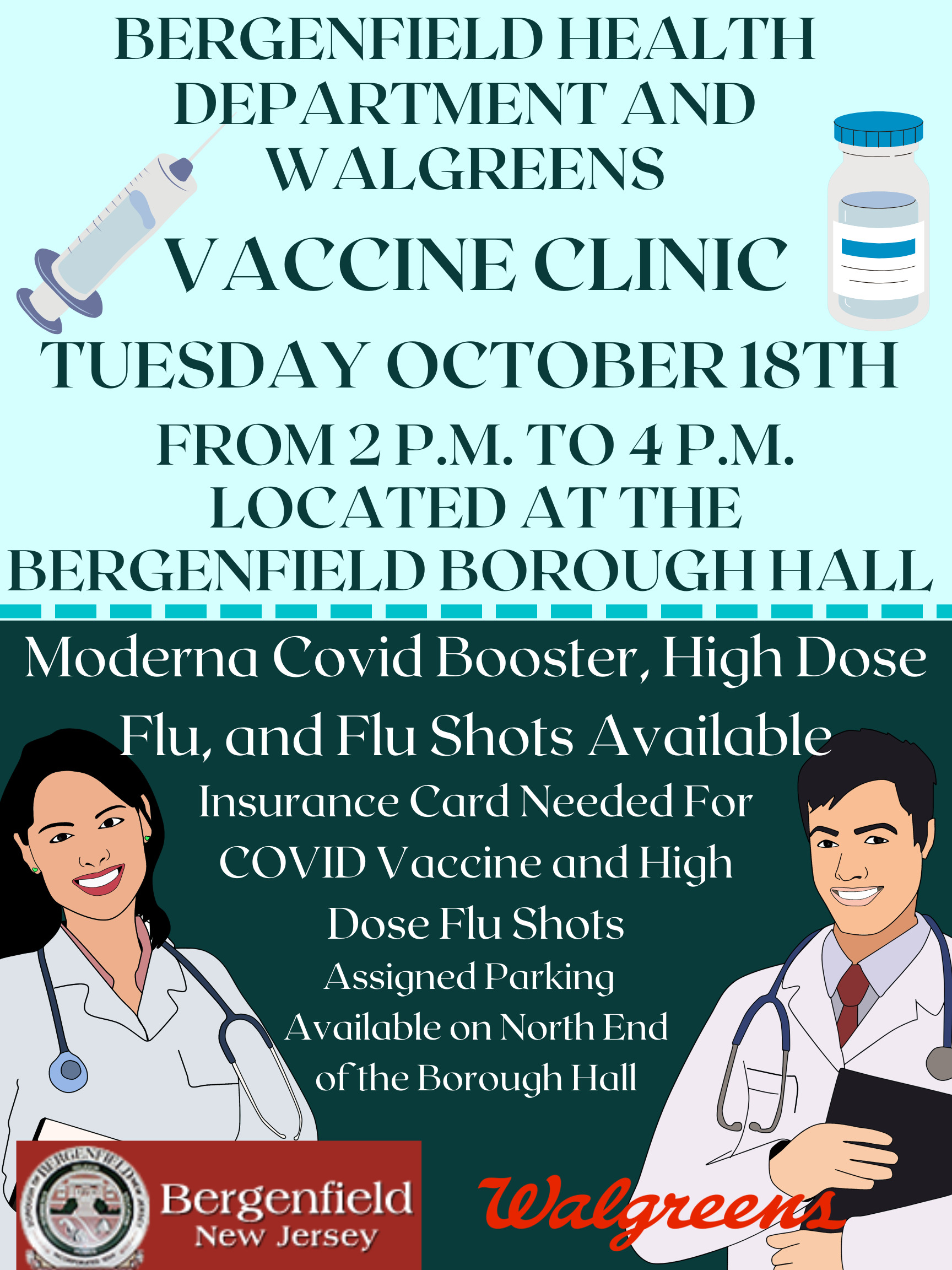 Updates on the impact of the COVID-19 / 2019 Novel Coronavirus ("Coronavirus Disease") upon the Bergenfield community, and the actions the Borough is taking

News from the Bergenfield Building Department

News from the Bergenfield Department of Public Works

News from the Bergenfield Health Department

News from the Bergenfield Public Library

News from the Bergenfield Office of Emergency Management

News from the Bergenfield Police Department

News from the Bergenfield Recreation Department

News from the Bergenfield Tax Office

Check here for updates and information about our 125 anniversary celebration events & activities.