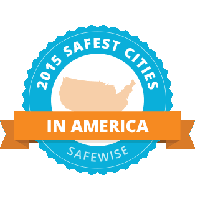 The SafeWise Report released its “100 Safest Cities in America” report this week. To compile this report, SafeWise used the most recent FBI crime data from 2013 to analyze and rank these cities, which all have a minimum population of 10,000 people.

“Widening the safest cities concept from a state-by-state analysis to include all of America seemed like the next logical step at SafeWise,” SafeWise security analyst Mike Strayer said. “That said, I think it’s safe to say we didn’t expect to see so many innovative, community-safety programs thriving all around the U.S. independently of one another.”

About SafeWise
SafeWise is a community-focused security organization committed to increasing safety education, awareness, and preparedness. We help our users compare security options in an informative and pressure-free environment so they can make the choice that’s right for their family. If you have any questions or concerns regarding the safest cities reports, please don’t hesitate to reach out.

In an article entitled "Family-friendly and Affordable" by Venessa Wong and Joel Stonington for Bloomberg Businessweek, the Borough of Bergenfield was ranked as the #2 best place in the State of New Jersey to raise children.

Using 2010 data from Onboard Informatics, a real estate information and technology company in New York, Bloomberg Businessweek evaluated a total of 5,418 locations nationwide with populations larger than the state median but no larger than 50,000. They considered only locations where the median income is within 20 percent of the state's median. The rankings put the most weight on school performance and the number of schools, crime statistics, and cost of living. Other factors included job growth, air quality, ethnic diversity, and access to recreational amenities (within the county), such as parks, zoos, theaters, and museums.

In the article "Six Bergen County Towns named among State's 10 Safest Municipalities," Stefanie Dazio lists the towns that were ranked by the consumer finance website, ValuePenguin. In the midsize municipality category, Bergenfield came in seventh (7).

According to the article, Bergenfield Police Chief Michael Carr lauded their citizens' and officers' efforts to make their community safer, and stated that "it's nice to be able to know that our statistics are showing that we are a safe city". 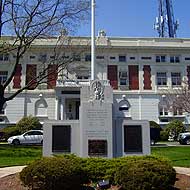 The Monmouth University Polling Institute and Graduate Program in Public Policy recently announced the results of their New Jersey E-Government Municipal Website Evaluation. The project assessed 540 municipal websites in New Jersey for both content and ease of use.

The Borough of Bergenfield's website was ranked in the top 20 as one of the best municipal websites.

“Municipal websites can be critical tools to inform and engage the public while creating efficiencies in the provision of public services. Efforts to incorporate technology into public sector service delivery and public interaction need to be supported in order to promote best practices statewide,” said Kathryn Kloby, director of the Monmouth University Graduate Program in Public Policy.

The study found that nearly all municipal websites in New Jersey provide the names of council members (98%), mayor (97%), and town clerk (94%), as well as the municipal hall address (96%). About two-thirds of town websites provide an email link or message function to directly reach the clerk (66%), mayor (61%), or council members (58%). Just under half provide department emails (48%).  owever, if a constituent does not know which department should be contacted, only 20% of websites provide a general email address to reach town hall.

It is worth noting that the coding team could not clearly locate the municipal budget on 15% of the websites, which is a state statutory requirement.  At the other end of the spectrum, content that is unlikely to be provided on municipal websites are video recordings of city council meetings (6%), crime statistics (3%), and online pet licensing (1%).

“Websites are probably the single most important tool for citizens to find local information. According to a poll we conducted in 2011, Garden State residents are far more likely to visit a municipal website than to call or write a town official,” said Patrick Murray, director of the Monmouth University Polling Institute.

The amount of content available on a municipal website correlates significantly to the size of the town. In other words, the larger the town, the more content the website is likely to provide. About three-quarters (74%) of websites for municipalities with populations of 10,000 or more include at least half of the 86 content items used in the evaluation. That declines to 64% among towns with populations between 5,000 and 10,000. There is a significant drop off to 38% of towns with populations between 2,500 and 5,000 who have at least half of the evaluated items on their websites, and a further drop to just 23% of towns with fewer than 2,500 people.

There is no clear relationship, though, for the ease of use component of the study. The Ease of Use score does appear to improve slightly among towns with larger populations, but it drops off at the top category of 25,000 residents or more.

Municipal spending appears to have limited impact on website quality. In fact, there seems to be a bell-shaped relationship between per capita spending and website content. Specifically, for towns whose municipal budget equates to between $750 and $2,000 per resident the average Content Score ranges along a narrow band from 35.0 to 35.7. This score is lower, though, for towns at either end of the per capita spending continuum, including those that spend over $2,000 per resident (32.5) and those that spend less than $750 per resident (31.3).

Methodology:  The project evaluated each website for the inclusion of 86 separate content items in four categories: information for citizens, citizen interaction, online government services, and social networking. The research team also assessed each municipal website for “ease of use” in finding four key pieces of information: mayor’s or mayor-equivalent’s contact information, building permit form or information, municipal budget, and trash/recycling information. Ease of use was determined by the amount of time it took to locate each piece of information on the website. Initial content scoring was done from March to June 2012 and ease of use evaluations were conducted from July to September 2012. More information on the study methodology can be found in the full report.

Neighborhoodscout recently ranked Bergenfield, New Jersey, as the 2nd safest in the nation on their list of the 100 safest cities in America with 25,000 or more people.

Neighborhoodscout based their rankings on the total number of property and violent crimes per 1,000 residents. Crimes include burglary, larceny-theft, motor vehicle theft, murder, forcible rape, armed robbery, and aggravated assault. Data used for this research consisted of 1) the number of total crimes reported to the FBI to have occurred in each city, and 2) the population of each city.

Bergenfield has just been ranked one of the 25 Safest Cities in America with a Safety Course of 94.4! ADTSecurity.com (ADT Authorized Dealer) analyzed data from the 2013 FBI Uniform Crime Report to assemble the list of the 25 safest cities in the U.S.A. Each city received an overall Safety Score based on the number of violent crimes and property crimes, weighted accordingly and relative to population.